Democrats and ruling by fear 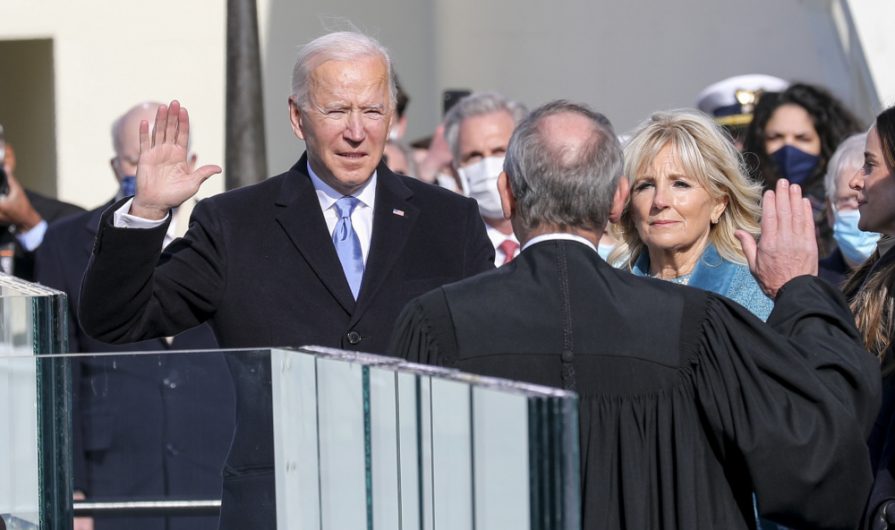 I have written many columns at the Reader and other alternative publications warning that corporate control of the federal government will bring catastrophe for our children and for the planet. I receive a lot of pushback, especially from liberals who argue that Trump is/was such a unique menace that the Democrats had no choice but to join with corporate America to assure victory.

The Democratic Party sold out working people long before Donald Trump. It was President Bill Clinton who pivoted to Wall Street. Clinton then ended the main federal antipoverty program (Aid to Families with Dependent Children), passed NAFTA, escalated the drug war, and ended the New Deal restraints on big banks, leading directly to the housing meltdown and the Great Recession of 2008.

Later, Barack Obama took in record amounts of Wall Street cash for his 2008 presidential campaign. Then, as e-mails obtained by WikiLeaks later revealed, he allowed Citigroup to select nearly his entire cabinet, which helped funnel trillions of bailout dollars to the banks, declined to prosecute a single Wall Street executive for mortgage fraud, and blocked legislation capping executive pay at bailed-out firms.

The Democratic Party now uses this same fear-based argument every four years: support our corporate-backed candidates or else you will get someone more horrible. By allowing the party to control us by fear, we invite further betrayals.

Nor should we accept the premise that Democrats have to sell out to win. Bernie Sanders relied on small donors rather than corporate bundlers and PACs, and he raised plenty of money to compete. Indeed, Sanders likely would have won the nomination had not the corporate-backed candidates joined together, at Obama’s urging, to support Joe Biden before Super Tuesday.

Moreover, candidates who take policy positions favoring the 95 percent rather than the five percent are much cheaper to sell and thus don’t need to raise huge sums of money. For one thing, they can call out their opponents for being tools of corporate interests, a devastatingly powerful argument that is unavailable to most Democrats and Republicans. Yes, it’s true, voters prefer representatives who are not in the pocket of big business.

To illustrate this point, in the elections last month, voters approved dozens of ballot initiatives brought by public interest groups that relied on grassroots organizing rather than expensive media campaigns. Arizona voters said yes to a tax surcharge on incomes above $250,000 a year specifically to raise teacher pay and recruit more teachers. Oregon voters approved a populist proposition to put strict controls on the corrupting power of big-money corporate donations in elections. Floridians voted to raise the state’s minimum wage to $15 an hour, a working-class advancement vehemently opposed by corporate giants. Colorado voted yes to require corporations to let employees earn paid time off for medical and family needs. Voters in six states— including in such supposedly conservative bastions as Arizona, Montana, Mississippi, and South Dakota—approved initiatives legalizing marijuana and other drug use.

The groups sponsoring these voter initiatives did not have corporate backing. They won because ordinary people liked what they were offering.

Contrary to what you hear in corporate media, the policies pushed by progressives are not radical or scary to ordinary people. Recent polls show that three in five Americans favor Medicare for All, two in three support a wealth tax, and even higher numbers support free college tuition. The Green New Deal is likewise broadly popular, even when respondents are informed that it will cost trillions of dollars.

In other words, the story propagated by corporate media that Americans are afraid of change is a lie. A recent New York Times article illustrates how the deceptive game is played. The piece tries to make the point that Americans don’t want real change by quoting South Carolina representative James Clyburn, who cautioned that if Democrats pursued policies like Medicare for All, “we’re not going to win.” What the article didn’t mention was that Clyburn has taken more money from the pharmaceutical industry in the past decade than any other member of the House or Senate.

Some readers accuse me of unfairly painting all corporate leaders as evil. This is untrue. I come from a family of corporate leaders who have high integrity. The reality is that publicly traded companies have no morality. They are profit-seeking engines. The personal views or morality of corporate directors is immaterial. They are under fiduciary obligation to seek maximum profits for the shareholders. Thus, if greater profits can be made by offshoring production to a country with lower wages and less environmental restrictions, this will be done even if it means screwing American workers and destroying the environment.

Allowing these profit-seeking engines to direct public policy—the current practice of D.C. Democrats and Republicans—will bring destruction to our country and planet. This is not hyperbole.

Consider the example of foreign policy. The American people don’t want forever wars or the bloated Pentagon budget that currently consumes well over half of our discretionary funds, and is greater than the military spending of the next nine countries combined. Meanwhile, one in eight Americans don’t have enough food to eat and 30 million Americans will soon be at risk of losing their homes.

But the American people have no say in the matter. Tragically, America’s foreign policy is controlled by the military-industrial complex and by the resource extraction industries. Bomb makers like Raytheon demand zones of active conflict to keep its assembly lines moving. Under Trump, our bombs fell at the rate of one every 12 minutes, killing thousands of defenseless Black and Brown people in Iraq, Syria, Afghanistan, and Yemen; surpassing Obama’s record of one bomb every half hour. Many of the people we slaughter are civilians; none were threatening to invade the United States.

Manufacturers of big-ticket items demand hostile relations with larger nations like Russia and China to justify new sales of aircraft carriers, nuclear submarines, F-35 fighter jets, and new generations of nuclear bombs. The mineral extracting industries demand that we maintain our empire of nearly 800 foreign military bases to crush the will of local people who oppose foreign exploitation of their lands.

None of this will significantly change under President Biden. Just this month, while Congress bickered over whether to provide relief to desperate Americans, both parties joined together to approve $741 billion for the Pentagon, assuring that the war machine will be well funded for another year.

The status quo also ensures the continued deterioration of the planet. The U.S. war machine is one of the largest polluters in history, consuming more liquid fuels and emitting more climate-changing gases than most medium-sized countries. In 2017, the U.S. military bought about 269,230 barrels of oil a day and emitted more than 25,000 kilotons of carbon dioxide by burning those fuels.

If the American people could choose our next secretary of state—the nation’s chief diplomat—they would select someone skilled at negotiating with our adversaries and easing tensions around the world. But the war industry demands a toady with the opposite skill set. So Biden has selected Antony Blinken, a man whose career has been a pendulum between government and the defense industry, where he made himself rich by writing memos advocating for new smarter more sustainable wars, and by selling his Rolodex of government contacts to help clients obtain defense contracts. Within the Obama administration, Blinken backed the interventions in Libya and Syria as well as the 2014 Ukraine coup, and he was a major proponent of backing the Saudi-led mass atrocities in Yemen. The fact that all these policies were disastrous for the people on the ground is not a negative for Blinken, because they were also highly profitable for the war industry. Blinken’s greatest career achievement appears to be his ability to keep Pentagon budgets rising while transitioning from Bush-era ground wars to smaller scale “sustainable operations.”

Some believe that the Democratic Party can still be rescued from the clutches of its corporate masters by electing progressives. This strategy is currently being tested. Progressives get themselves elected to Congress promising to stand up to the establishment Democrats and to fight for things like universal health care. Right now, they have a chance to demand a debate and floor vote on Medicare for All (MFA), a bill introduced in February 2019 by Representative Pramila Jayapal with dozens of cosponsors, but never brought to the floor despite its overwhelming popularity with Democratic voters. Because the Democrats now have such a slim majority in the House, a handful of progressives in Congress could force a vote on Medicare for All in exchange for their support for Nancy Pelosi’s reelection as speaker.

This idea that progressives might use their leverage to force a vote on Medicare for All was not proposed by any member of Congress but by Jimmy Dore, a comedian and activist, on his YouTube show. Yet his plan has gained wide support on social media. Dore has called out Representative Alexandria Ocasio-Cortez and other progressives for shrinking away from the fight over MFA after running on the issue and promising to stand up to Pelosi and the corporate Democrats. Forced to respond, AOC called Dore’s strategy too risky because the Dems might lose the speakership. But Speaker Pelosi can guarantee her reelection simply by scheduling a floor vote on a bill introduced almost two years ago with dozens of cosponsors, supported by 85 percent of Democratic voters, and about half of Republican voters. That is not an unreasonable demand of the speaker.

AOC also says we might lose the vote on MFA. But if not now, when? We are in the middle of a deadly pandemic, and we all need our neighbors to be able to go see a doctor if they feel sick without fear of bankrupting their families. Fifteen million Americans have already lost their health insurance and their jobs. Dore asks—are the House progressives fighters or are they posers?

The progressives had similar leverage back in the spring when the big donors demanded that Congress pass the CARES Act, giving Wall Street $5 trillion and an assurance that it would face no hardship from the shutdown. But progressives let that leverage slip away and then accepted only scraps for working people, many of whom have been forced to stay home for months with no income. Now is the time to demand that the richest country on Earth provide health care to its people.

Of course, a government-run health care system will hurt the profits for big pharma, big insurance, and big hospital groups. But we all must sacrifice in times of great struggle.

See the Article at The Reader 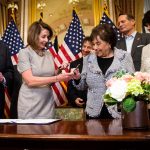 One Response to " Democrats and ruling by fear "